I have always been interested and fascinated by projections and screens in public space. Not the usual tv in a metro which shows news but visual elements that change the environment and use them as integral part. Back in 2007 I wrote about my friend Frederic Eyl who invented the “parasite”, which can be placed at the outside of a metro wagon and projects on the outside wall so travelers see the visuals from the inside.

In 2001 I was witness to one of the most impressive projects, a whole house as a screen, using single windows with lamps behind as digits! Blinkenlights took place the first time in Berlin at Alexanderplatz, watch a video documentary: 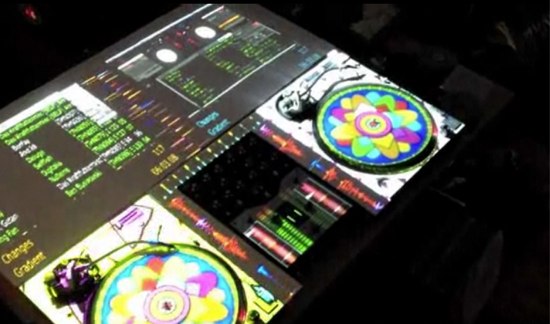 Wow, here is the next step, using records and mixer as background for user interface projections and making the pictures and the software react to gestures. Check out a video below. Read more →

Doritos teamed up with several agencies (e.g. Mekanism and Proto) and Blink182 to present a concert on a snacks bag. In fall 2009, on www.doritoslatenight.com you could hold a marker printed on a Doritos bag into the webcam connected to … Read more →

Ok, now here we are with augmented reality, it is starting. We have the tools like webcams and Actionscript and in flow the impressive examples. AR Business Card from James Alliban on Vimeo. You can try it too! Print this … Read more →

Back in the days