Our road trip started with travelling to Viñales via La Teraza, a beautiful region with many tobacco fields. We picked up a hitchhiker who then showed us the cigar production he works for. We learned all about different shapes and leaves and how to roll them. It looked easy. But only because the man had 14 years of experience, I guess. 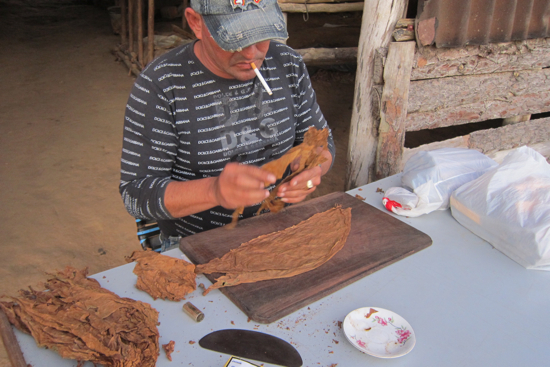 Next day we somehow got lured into a horse ride. Sitting on a horse called Moreno I got carried around the valley. We visited a cave inside a very peculiar hill which looked like it had fallen directly there from space. But next time I prefer to walk, it felt like sitting on a pony at a fun fair.

Still, sun in the face, surrounded by landscape, holiday started to kick in on Moreno’s back. Pretty place, but we had to get back on the road. So we left Viñales after only a day to go to the west where we ended up in a little town called Sandino.

Sandino consists almost entirely of run down socialist buildings from the 60ies which give the city a very Eastern European look. There is only one house where tourists can stay and the owner already waited for us, waving in the street. The house’s food was far more than generous, and featured a tasty chicken and rice. The sunset was amazing and bathed the blocks in a fruity, violet golden glow.

Next day we went to see the lonely beach towards Maria La Gorda and it certainly was very lonely and virgin and end of-the-world like. Our first Cuban beach. Flipping stones. Reading Cuban short stories. Great.

Holiday kicked in a little more with a bit of excitement. And we left in the afternoon to go towards Santa Clara.

The big mistake was to believe we could actually take a detour and avoid the motorway which by far is the fastest way to go towards Cuba. But we had gone there already and wanted to see something else. Only that we ended up in a totally lost spider web of sandy paths while the sun was going down.

On the map it looked like this were actual streets, in reality you would need a traktor. There was no way to go any further so the only alternative was going north to San Antonio, a small town, influenced by the military force which has barracks and an airport there. Listening to the jets start and land above our heads was kind of creepy. But also kind of cool. The room we stayed in was funny, I like the suggestion of a wall between bath and room there.

Read the first part or the third part and drop me a comment if you want to know more details!