My recent trip to Cuba was like a gigantic ride in a big theme park, full of adventures, challenges and encounters, like at different game levels. Me and my friend Robert road more than 2000 km on infamous roads and spent a very complete trip. Included were hiking, swimming in waterfalls, staying with families, dancing in sketchy open air joints, drinking rum and getting to know many, many people. Here is what happened.

Havana
January first, arrival in Havana. Smell of frying fat and auto gas. 25°C, streets full of people, strolling, hanging out or trying to get a hitchhike. We arrived late so we had to wake up our first host family. They took it with charme in pyjamas. Sleep after a long flight.

Breakfast, long walk from Vedado, our neighborhood (best in Havana imho) to the centre, through the newer one (Centro Habana) to the old (Habana Vieja). Havana has beautiful colonial villas, mixed with 70s and 80s skyscrapers and small simple family houses, but hardly any new buildings. Many of them are run down, but some in good shape. Some are actually falling apart. The vanishing beauty has a certain kind of melancholy to it.

Cuba is one of the last countries with a socialist political system. Only a few months ago it became possible for people to sell and buy real estate. Shortly before, one-person businesses were made legal. Internet is very expensive and rare, there is only one newspaper which consists of 10 pages each day. There is no product advertising since every product exists only once. On public displays you will instead read life instructions like to defend socialism, watch out for enemies and to enforce the revolution within yourself everyday, illustrated by numerous paintings of Che and Fidel. Travelling is only possible for a few people.

There are two currencies: the “moneda nacional” to buy local products, pay for electricity etc. All imported products are paid in CUC, or “convertibles”. If you pay in local money, it is very cheap, but most things for tourists (hostels, gasoline, food at the families) are in CUC and pretty expensive. The money families make with hosting tourists goes to a big part to the government as tax. Still, it is a good way for Cubans to earn something extra.

People don’t have much and they have to get around many difficulties, like public transport, fixing things over and over again and having “more time than life”, as a Cuban saying goes. But somehow, most seem to get along with it somehow, in a stoic, relaxed and ironic way. Maybe socialism works better on a Caribbean island than in Siberia. You don’t want to wait for a hitchhike for hours in Siberia. But let’s go back to Havana.

We strolled around in el centro for a little bit, looking at empty shelves in stores and beginning to feel the relaxed buzz of the city. Somebody offered us to be his driver, because he knew his way around plus we could drink all the time. He seemed more of the kind that we had to take care of later so we said no. Finally, we had a glas of 15 year old rum, which was good but shockingly expensive. My advice for rum: 5 years is old enough, it’s good but it does not get much better.

We took a cab home and experienced a highlight: the kick with the boys from the block on the streets, thanks to Andi, the son of the family who took us there.

Havana was fine, but it was time to get on the road. Next day we were about to meet our car. I was relieved we actually got it (we had paid for it in advance) but there it was, a brand new Geely.

We called her Margarita. She had a tough time with us on the Cuban streets with potholes big like bathtubs which turn to mudways all of a sudden sometimes. But we always spared a caring clap and a “sorry” after painful bumps and so she took us all the way around Cuba from the far west to Santa Clara in the middle. 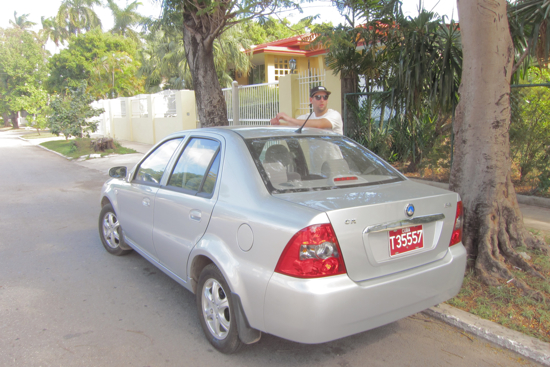 Read part 2 and drop me a comment if you want to know more details!