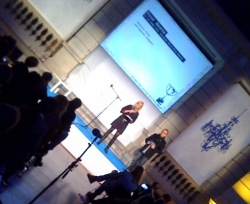 Yesterday, I attended the ceremony of Deutsche Welle to award the Best of Blogs (theBOBS) which, according to the jury, are the best blogs in different national categories, as well as in video and audio in 2009.

Peter aka thewavingcat blogged live with a very fascinating tool called Coveritlive. It has a very smooth editor surface to write, comment and adjust stuff and codes which can be embedded in other websites where your twitterlike short news are flowing in and can be commented. He worked really hard in typing down the many informations from the stage, approving comments AND answering questions from a worldwide crowd. Respect! Also, Stefanie Suren and Andreas Schepers did a good job in guiding the audience through the evening with a plimpse of Hollywood feel: “And the winner is..!”

Was there too much show and glam and too little seriousness? Especially taking into account that e.g. the Chinese jury member was not allowed to travel to Germany or Cédric Kalonji from Kongo talked about war and repressions in his country? That less jury members and more bloggers should be invited? Yes and no I’d say. All of the blogs represent the myriad stories that take place every day, happening to all of us. Impossible to do justice on every unrighteousness touched yesterday. Plus: At least here in Berlin, while celebrating blogs as a great thing everybody should have some fun. But: More unknown bloggers on stage please, maybe jury memebers could be represented with video statements and instead the winners be invited.

Overall, it was a very nice event, not to crowded but packed with interesting people from all over the world. The decisions of the jury can, like all personal decisions, be questioned to if they really picked the best blogs but it was certainly a selection of honest, liberal thinking writers with loyal readers who write from their hearts and represent a voice for the people, often in countries where “the people” do not really have a voice. Browse through all the winners and feel inspired and read a transcript of yesterdays live blogging.