This is a story of either a bold theft of creativity or a big big coincidence. It is a story of a blogger and a multi million dollar company, a story of an idea and its name, a dream and a campaign. Read the full thing.

The problem is: “Around the world in 80 jobs” is also the name of a website by blogger Turner Barr from Washington. He is actually doing what the title depicts: Travelling the world and working in different jobs and blogging about it. Turner has been doing this since 2011. Adecco applied for the trademark in April 2013.

Barr is upset: “Recently, I was both astonished and demoralized to find that my entire brand, image and web personality was swiped for use in a marketing campaign … without ever being asked for permission or acknowledged. The video for their marketing campaign was particularly creepy for me, as even my age and personality didn’t escape the level of detail spent on creating this doppelganger” 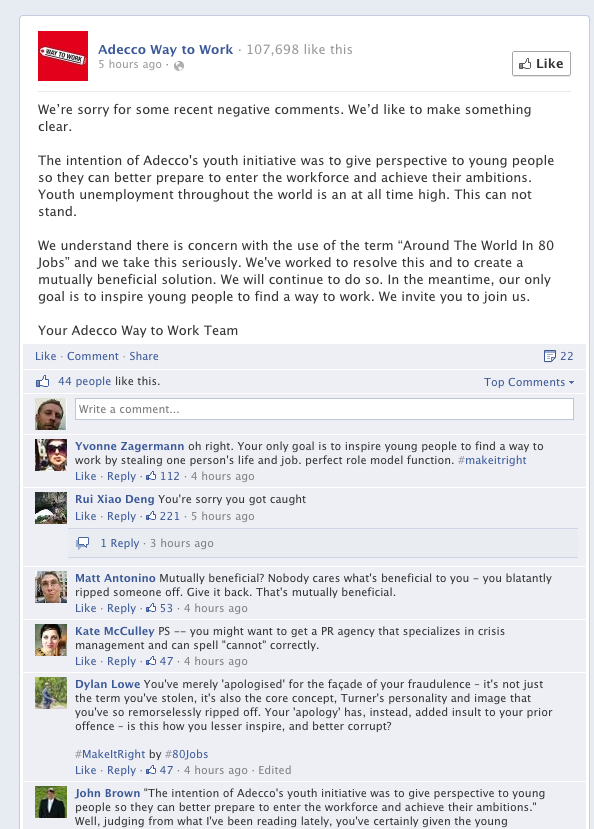 I mailed Adecco’s German press office to get a statement, explicitly asking if they were knowingly using somebody else’s idea. Here is the answer (in English, find the German original at the bottom of the article):

“‘Around the World in 80 Jobs’ is just the name of a competition as part of our initiative. With ‘Adecco Way to Work’ we want to give young people perspectives and inspiration, especially considering the difficult situation in Southern Europe. We are aware that there is a conflict in the use of the name ‘Around the world in 80 jobs’. We are trying to find a solution. Today we do not see the necessity to take legal steps against Mr Barr. We did communicate to him that he may use the name in the US and beyond. The initiative is about the perspective of young people, not about the name.”

It does not create jobs. It does not create perspectives. The information about finding a job on the website are the same you can find anywhere else. The free coaching sessions can be found in one Southern European country, Italy, at least. Not in Spain. Not in Greece. Not in Portugal. The link to the Chilean offer leads to a pure informational website.

I adressed these questions in my reply to Adecco. I also asked Turner Barr for a statement. I’ll post an update as soon as I have answers.

According to the blog of the the agency Simplyzesty, the agency Mortierbrigade is behind the execution. It would be easy for Adecco to blame the agency and claim they had no idea about the original blog. But that would be too easy.

Here is my personal opinion: I don’t think everybody involved knew it was a copy. But some did. Which is why they registered the trademark to be safe themselves.

As a blogger I would feel the same as Turner, abused and then ignored by a very big company. As a marketer and agency creative, I feel ashamed. Do we not do our job because we like to develop ideas and come up with new exciting stories? To innovate?

Everybody is still waiting for an official statement and offer by Adecco. I am curious how this story unfolds. Especially since I suspect Adecco had planned to release some great videos showing the winners of the competition working in exciting jobs.