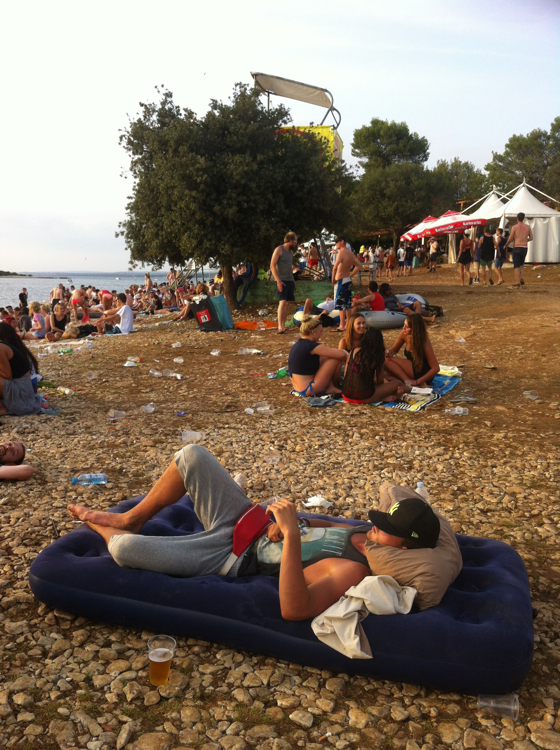 Deserted festival stages have something melancholic, yet promising about them. At daytime, without people, they look like resting giants, awaiting the night and the lights and the audience. All silent, about to be filled with life. I like that view. Here are most of the Outlook stages at daytime.

This is the main one (quite a standard festival stage). 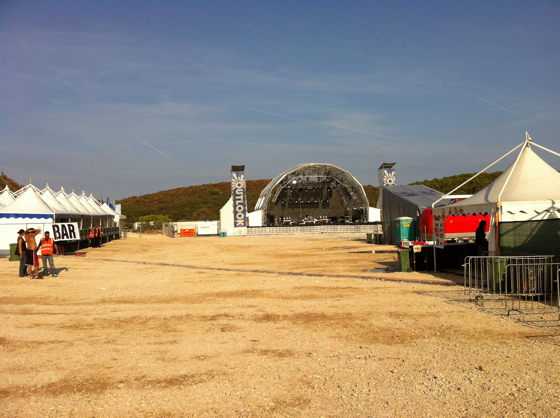 The following are all the stages in and between the old fort. Fort1 and Mungo’s are the biggest and connected by a path on top of them. Inside the fort, there is the Courtyard, the Dungeon (inside, very small) and my favorite: Noah’s ballroom. Only a small circle, surrounded by big walls. 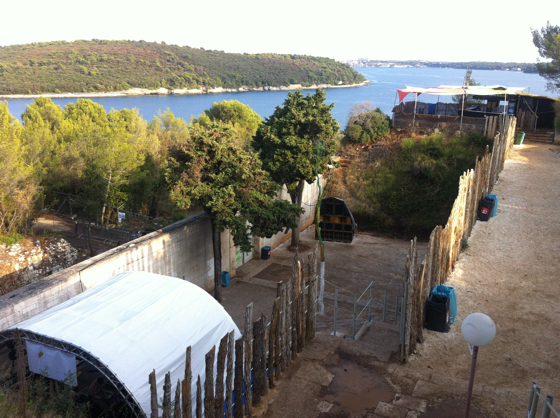 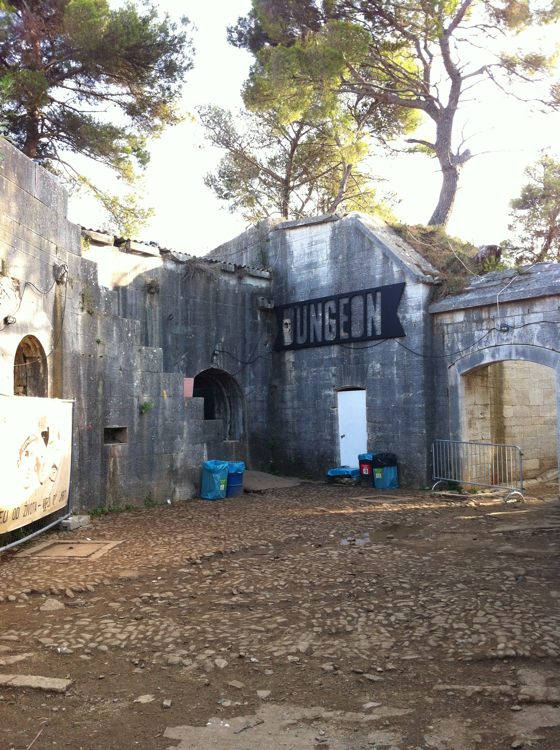 I did not get a good picture of the ballroom by day, so here’s one by night. 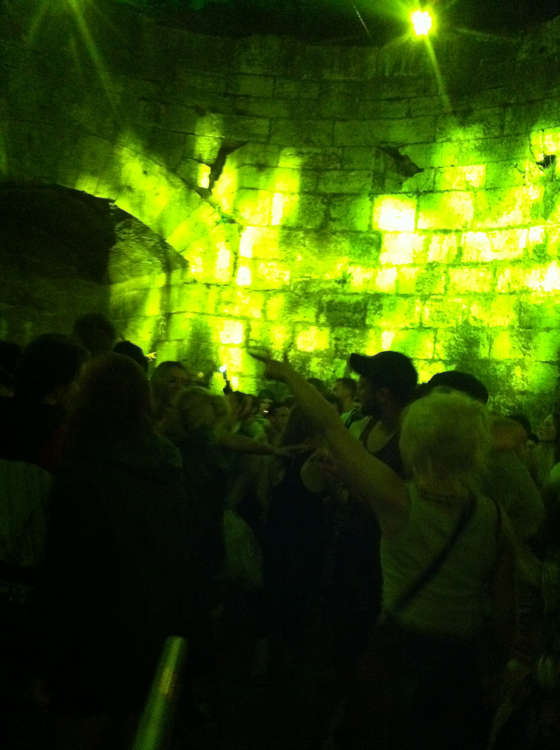 The most impressive is certainly the Moat. Situated in the old water moat around the heavy walls of the fort it is almost 100 meters long and forms an infamous tunnel of bass. 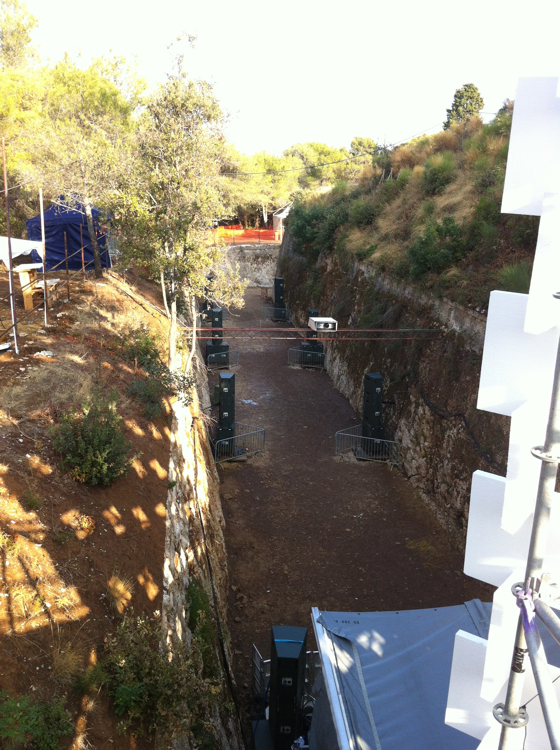 Back to the beach to enjoy the last sun beams. 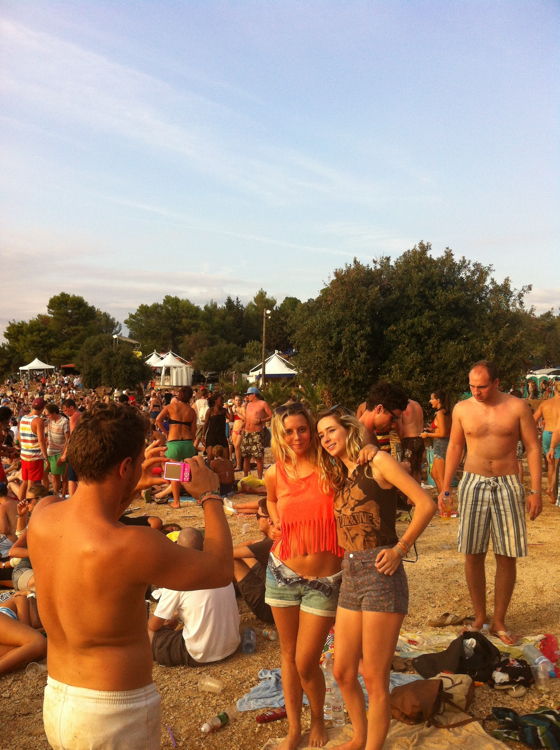 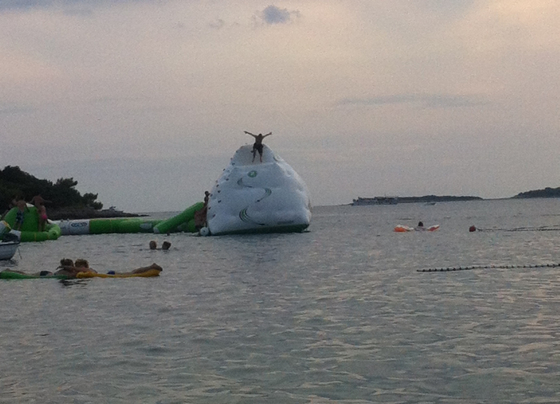 All I needed now, was to get on a boat. I walked down to the harbor to try my luck. Only to see the last of four ships float away in front of me. 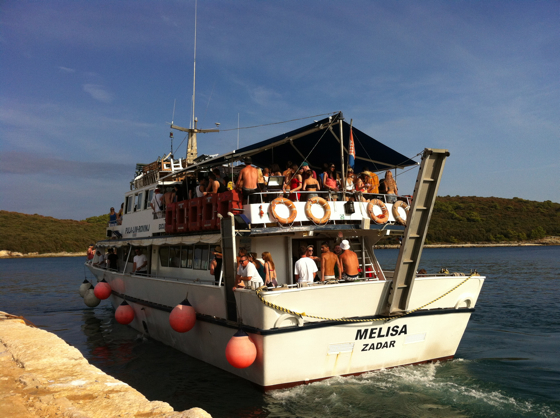 But no worries, I managed to convince the boat organizers that it would be extremely necessary to also report from a boat to make the festival experience complete.

I was superthankful for the courtesy to put me on a boat in the last minute, because it is actually very difficult to get on these. Apparently the official tickets sold out within 10 minutes. And many people would have loved to get on the boat I finally came on.

Take a look at the Reggae boat. It’s not the one I was on, but it’s a good impression of the steamy atmosphere there. 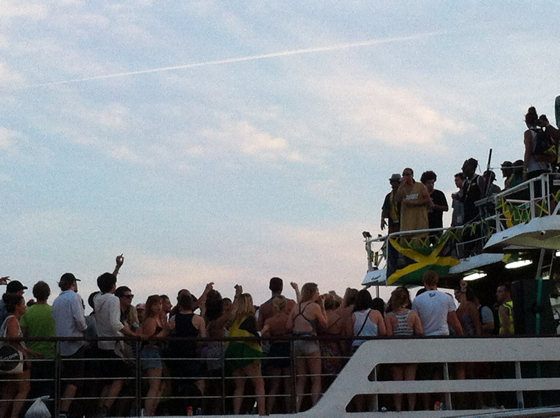 Boat parties in general are great. Not only because floating is nice and sun and nature and all that but from the view of the social dynamics also. You really have the chance to get to know people. Obviously, nobody can leave for several hours and the music also builds up a very intimate atmosphere.

Talking about the music: As said, I was lucky to get on the DMZ boat with Mala. Very deep and crystal sound, relaxed and intense, like made for this kind of cruise. A perfect start into a night where I should get much more of my desired style of music. On display was also Skream’s “booze cruise” but that would have been too much for me for sure.

So I danced smoothly and talked to some Swiss people, a bunch from the Netherlands, an engineering woman who designs oil platforms and last but not least the Croatian sailor who gave me his flirting advice: “You have to let the girl know that you want her!” Ok, thanks!

My next stop was the Dockside stage with the Chestplate vs Osiris night. I stayed for almost three hours and watched Kryptic Minds, Distance and Youngsta together with thousands of people and with such a clear and powerful sound that made the music literally appear in the air. Impressive. Also the amount and the excitement of the audience for musicians who probably would gather no more than 300 people or so in Berlin!

The rest of the night went on like most festival nights, strolling around, bumping into people, like the owner of the hostel I stayed in and also other people I had met the day before. It is this kind of familial feeling that makes you sad when the event is over. And despite the size of the area and about 20 000 people being there, Outlook is small enough to allow for this encounters.

I wish the organizers all the best for keeping that spirit. But I am quite confident that they will. These people know what they do and they did a really good job. The sound is superb, the light was good, although there is certainly more room for unusual ideas like this projection surface out of styrofoam which makes the stage look like a socialist building. 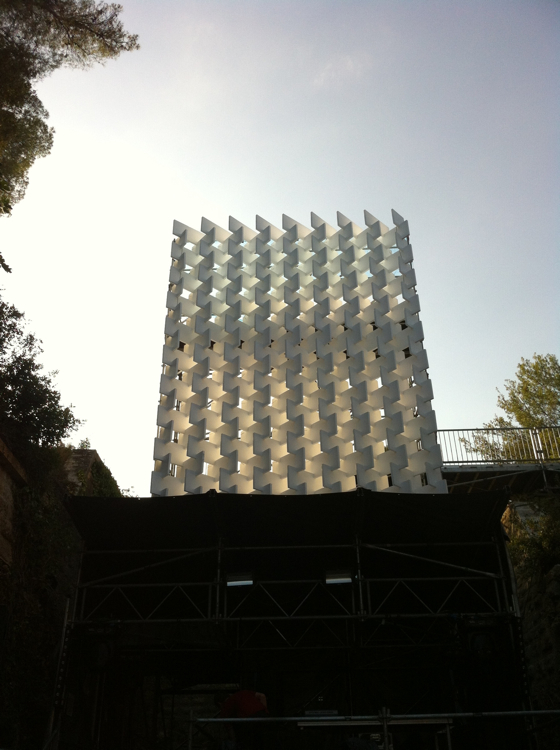 The securities were professional and friendly and certainly did a good job in managing the crowd in the very little floors. The only security issue were some dodgy black taxi drivers who tried to get people in their cars and apparently also attacked someone directly outside the area. So be careful there!

I also liked the food, especially the fruit salad revived my spirits friday at night! And suprisingly there was no big brand sponsoring to see, only the usual drink branding. And that’s quite cool because it makes the festival more unique and less standardized.

To put in a nutshell: Even if I missed my flight home because the boat came in too late to Venice and I am on a train to Milan to catch the last Easyjet flight to Berlin which makes about 160 EUR extra including the train ticket and even if it was an Odyssee to get there, I had a great time. I had inspiring musical moments, many conversations with new people, some sun, some rain, some meditarrenean water around my feet and the perfect little getaway I needed from Berlin.

Thank you Outlook, hvala Pula and Croatia for this weekend!