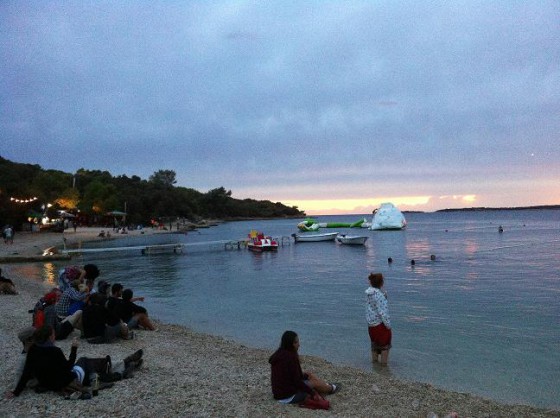 Wow. This place is amazing. And worth every minute of the odyssey it took me to get here. Remember: I wanted to visit Outlook Festival 2012 and figured out a cool way to travel from Berlin: To Venice by plane and to Pula, Croatia, by boat. Here’s what happened.

The boat ride was not at all as glamorous as I had imagined it. Instead of elegantly floating in at the harbor with a glass of Martini at hand, the boat jumped over 5 meter tall waves for three hours constantly. Almost everybody got sick on the boat including the dog. Finally in Pula, the storm and rain was immense, streets drowning in water, flashes and thunder all around. Yay, welcome to the summer festival experience!

So no more festival for me on Friday. I had checked in at a nice hostel, the Riva hostel which is directly down at the harbor and very friendly and cosy, went out to eat and fell asleep almost instantly. Saturday consisted of looking at some sites in Pula like an old Franciscan monastery, skillfully explained by a girl I had met on the boat and who happened to be a archaeologist. Great! That is the thing about travelling alone: You get to know so many people and interesting stories because you’re so open and flexible. 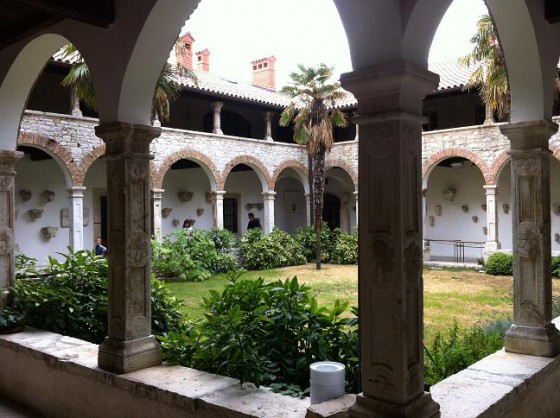 The hostel hosted mainly “Outlookers”. With very very dirty shoes. So I decided to get some new ones to avoid ruining mine. I chose cheap white trainers to get the most out of the upcoming dirt experience. 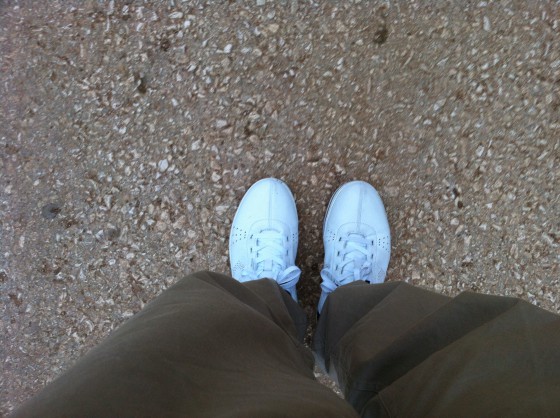 With a bunch of English girls, a Canadian and a Finnish guy from the hostel we took a bus and after a long walk ended up at the beach with a bar, a little reggae stage and people playing around in the water.

Wow. And here it was, the magical festival moment. I had lost my faith almost with all the rain and the hassle, but wow. I could feel the good vibes and sense a bass from far away.

To explore the site, I had some experts on my side again. Kleinski and Sesner from the Riddim Box took me under their wings and showed me around. And there was much to see. The area is huge and the festival has more than 10 stages.

During the day, there’s music by the beach and boats float around in the Mediterranean with soundsystems organized by different labels. At night there are two big stages down by the harbor, one middle sized stage in between the beach, the harbor and the fort. The fort is from the 19th century and in and around are 6 more stages. Some of them only with a capacity of 120 people which brings in a true club atmosphere. In total I would assume Outlook festival has about 20 000 visitors.

So, totally overwhelming. Great sound, great lights and crowd consisting mainly of young British bass music lovers mixed with enthusiasts from Croatia and the rest of Europe. It took a while until I started to figure out what each stage was like. I basically ran around in between floors bumping into people I had met before and just enjoyed the music. With no particular highlights I have to say. I must have seen Ben UFO, Mensah, Hyetal, Fantastic Mr Fox and Kode9 and everything was good but maybe a bit too much to digest at once. And also the constant rain got on the nerves after some hours outside. Still, I was so happy to finally being there and having made the decision for this little trip. 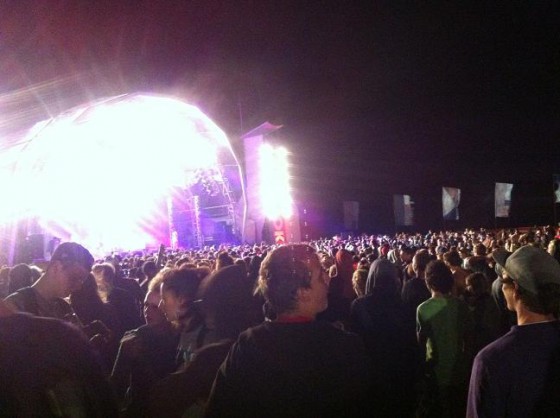 Getting home was another lucky encounter. I met a girl who works at the hostel I stay in and two of her friends and we were going share a taxi. But the drivers wanted to charge five times the usual price. “Bastards, that’s too expensive, I call my dad!” said one of the girls. Dad came, drove us home and I had a funny conversation about football on top. Great day, great finish. With the bass still in my head, I fell asleep.