‎”I am a trader. We traders don’t care how you’re going to fix the economy. I dream about recession every night because you can make money in a recession.” This interview at BBC shocked viewers worldwide by its blatant openness and brutal honesty. It shows the total ignorance of financial market professionals towards the well being of the economy and its effect on the people. Alessio Rastani, a trader from London speaks about how they profit from worldwide recession and debt crisis of countries and what techniques can be used to strengthen the effect of a declining market allowing hedge funds to make money by placing bets on countries going bankrupt or crashing stock values.

It’s ironic that BBC reporter Robert Peston shortly believed that they were set up by satirical cultural jamming group Yes Men because nobody would believe a trader would be so open about his views of the world. Shortly later, he confirmed that this interview was actually legit and Forbes just published an interview with Rastani, stating him “I trade the momentum”. Right now his Facebook wall is full of hate, as you can see below but to be honest: Rastani does not really say something new. Everybody knows that there is a lot of money to make if you push the right buttons in a crisis. Rastani is a freelance trader, he works from home and actually he is only one in thousands of people who move money in the market. But he gives the anonymous and abstract thing “financial markets” a face.

People cannot understand what these markets are and why they have such a great influence on their jobs, their pensions, the news and politicians everyday. It’s a conglomerate of people, institutions, robots who all act according to different rules and nobody understands the motivations or mechanisms fully. Whenever a person pops up, the boss of a bank, a hedge fund manager or a freelancer trader who speaks his mind people get furious. But Rastani is only a small piece a big system, so don’t shoot the messenger. On the contrary, you actually have to pay the guy some respect for his honesty and transparency. In the Forbes interview is surprised by the attention he gets and says: “I think it’s overblown. I have no idea why I’m getting this attention. I don’t think it was news. For someone to say what I said, I thought everybody already knew this kind of stuff. The big players of funds rule the world, I don’t think that was news.” And sad but true, he is probably right. 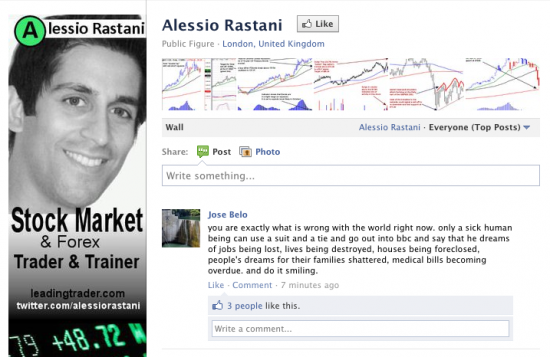