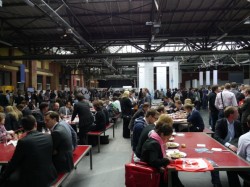 Last week I attended the Next conference, here is a personal summary and some reflections. First and overall I really liked next11, it had a good atmosphere and creative feel, interesting audience and I sticky ideas to share.

Of course, the talks and encounters are the most important thing at such an event and it was really a shame I did not have time to talk and chat more with people. Station is a good location, the lectures where in different rooms that all left from a central hall that had the feel of a marketplace and also served as restaurant and party area.

Too bad also I did not take any pictures, the official Flickr does not have images that capture the atmosphere either. The photo is from t3n, who have many more pictures from next11.

The panels where diverse, the curators did a great job in my opinion this year. To my mind stuck the AKQA showcase with Ian Crocombe who e.g. talked about the Fiat Eco Drive, a car which comes with a software that analyzes the driving and suggests ways to consume less energy. Or Andrew Zolty by BreakfastNY with his twittering oven and the blimb who checks in to Foursquare automatically.

Vincent Schmidlin by Scholz & Friends talked about archetypical heroes in human narrations and how brands can be seen in such a way (Slideshare in German). And of course I enjoyed to see my friends Bastian by Jovoto who showcased the Betacup case and David from Soundcloud who had many examples of user love like this one:
Soundclouder of the day – Thankyou song by David Philips.

Here is David’s talk on Soundcloud.

Nextweb has a nice interview with the Startup pitch winner wahwah.fm and on Techcrunch Angry birds announce 200 Mio downloads. The videos from the conference should be up soon I guess. Thank you, next team! Here are all articles related to Next conference.