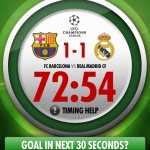 Only two weeks ago, Heineken came out with the Starplayer iPhone app, which lets players estimate situations in Champions league football matches, while watching it on tv. I had the chance to test it from the beginning and I have to say it’s pretty impressive overall. The concept to run a game simultaneously to popular football games and let players worldwide play against each other is as simple as it is genius and the app is very well done. There are few things I did not like so much: 1st) I fail a lot, and I think I am not he only one, so it’s pretty difficult and on the edge on being demotivating. 2nd) it takes a lot of energy, the phone is almost empty after a match and 3rd) there are some minor usability flaws, like images that look clickable but aren’t. Here are some screenshots and explanations: 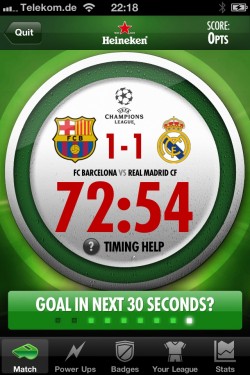 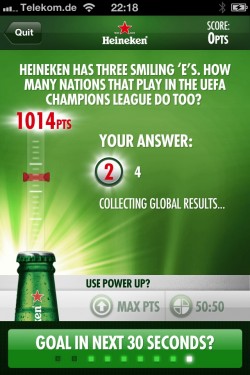 The first screen is the standard screen while a match is running. Before you have to logon, connect your social media accounts if you like and chose a match. If you think a goal is near you can push the bar at the bottom and gain lots of points if they really score within 30 seconds. The image to the right shows one of several questions that pop up during the game. 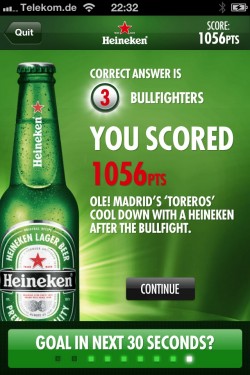 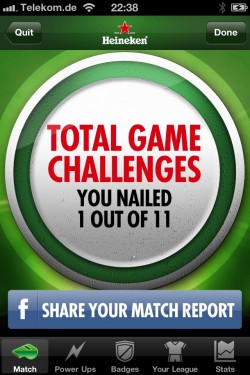 Corners and free kicks give you an extra chance to score (no screen unfortunately): Players decide whether it will be a goal, cleared, missed or caught by the keeper. At the end of the match of course you can share the result with your social media friends.

The impressive thing about the app is the real time factor. Not only must there be somebody to push in the live events like corners or goals but the technology must also be able to push these events to the players and collect inputs correctly, e.g. know if the player really selected a goal before it happened. The app was built by AKQA, the impact is evaluated by Blauw Research. Well done!