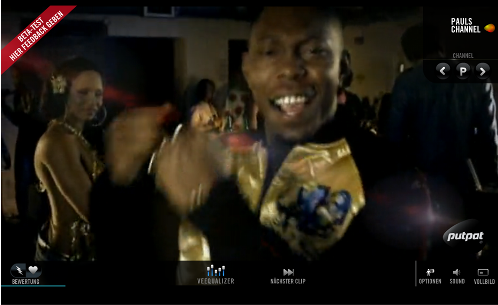 Putpat is another musicvideosite which aims to make it simple and easy to watch music videos like back in the ol’ days on MTV. A simple, flash based interface lets you skip videos, change channels, and love or ban videos. Based on this bans or loves plus on a tool called Veequalizer users can build their own channels which will then deliver videos according to taste and mood.

Putpat has a lot of videos, also more independet artists and a nice preselection of channels. It’s a simple form of web-tv and competes directly with tape.tv and MTV music. I like, it’s a nice way of background entertainment while you do other stuff like hanging wet clothes, tyding and such.

Some background facts: Putpat was founded by ex Viva (German television, later bought by MTV) employees, the musicmagazine Intro also is involved. Putpat will try to finance its service with video ads in between the music videos. Due to the complexity of the license and legal situation, Putpat is right now only accesible for German users.

I posted this article also on P3000.net where you can also comment to receive invitations.